Minimizing Downtime While Upgrading Digital LED Units
Location: Baltimore, Maryland
Once again OSI takes on a project that involves an incredibly high value outdoor advertising structure. This billboard structure is located on the eastern entrance to the Fort McHenry tunnel where it displays to traffic on both sides of the interstate. It also is highly visible to all vehicles approaching and then stopped at the western toll booth. 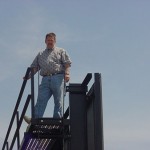